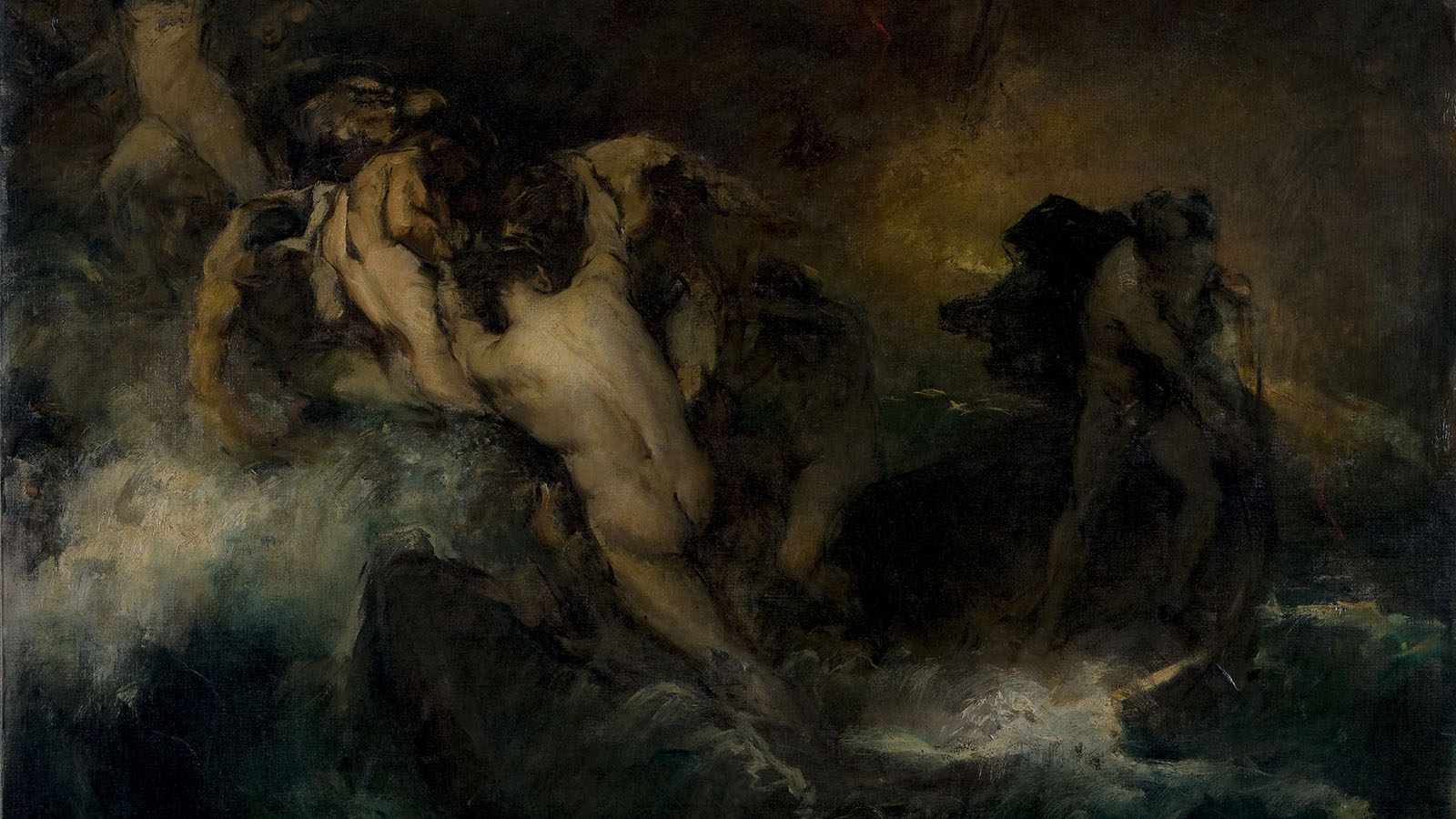 Felix Resurreccion Hidalgo's place in Philippine Art was secured in the last quarter of the nineteenth century through his large Neoclassical canvases which harvested Gold and Silver Medals in prestigious International Exhibitions. At a time when merely to have one's painting accepted and hung in the highly competitive International Exhibits was a mark of having arrived as a painter, Hidalgo's entries stood out among thousands of paintings (representing in these Exhibits the best Europe and America had to offer) to win distinction: a Gold Medal for his major work, La Barca de Aqueronte and Silver Medals for two others (Jovenes Cristianas Expuestas al Populacho and Adios del Sol). It is therefore through these two historical paintings "in the grand manner" (a seascape with figure, Adios del Sol is a departure from the traditional manner) that Hidalgo's reputation as a painter is assured in both Philippine Art history and the popular mind.

FELIX RESURRECCION HIDALGO Y PADILLA was born on February 21, 1853, in Binondo, Manila, of Eduardo R. Hidalgo and Barbara Padilla. He was third of seven children.

Hidalgo studied at the Ateneo de Manila and the University of Santo Tomas. His parents were preparing him for law profession, but the young man was more interested in the brush and the palette. His first drawing lessons were taken under Fr. Sabater. Later he enrolled at the School of Fine Arts, maintained by Agustin Saiz, a master of the middle 19th century. During the period, the young man showed his talent when he won, in 1877, the second prize in a contest to select the best design for the grand edition of Fr. Manuel Blanco's "Flora de Manila." The first prize went to his teacher.

He was sent to Spain in 1879 as a pensionado and studied in the School of Fine Arts in Madrid. Upon termination of his studies, instead of returning to the Philippines, he went to Paris and put up a gallery at 43 Blvd. Arago. Hidalgo was then on his own. For a while he suffered and starved in the best artistic tradition. Later, however his family came upon some measure of prosperity and was able to maintain him. An uncle, P. Jose Sabido Padilla, helped him when the business of his mother suffered reverses. His studio became one of the centers of Filipino activities. There, Filipino exiles and revolutionaries found a sanctuary.

In Paris, Hidalgo saw his most productive period. In 1884, he contributed three canvases to the Exposicion Nacional de Bellas Artes. He won a silver medal for his "Virgenes Cristianas Expuestas al Populache." (The first study of this painting is part of the present collection.) It was also in this contest that Luna won a gold medal for his "Spoliarium."

Hidalgo produced over a thousand works which include oil paintings, water-color, pastels and charcoal drawings. His subjects range from the mythological and historical to landscapes, seascapes, portraits and figures of the genre.

He received awards in Paris in 1889, in Chicago in 1892 and in the Panama-Pacific Exposition in 1915. Eventually, he became a great prize winner and his paintings were exhibited at the French Academy and marked H.C. (Hors Concours). However, he kept to himself and continued in his romantic studies despite the artistic revolution going on in his time. Thus while some of his later paintings showed some impressionist influence, he was never in the center of the movement and the impressionist school pass him by.

Hidalgo came home in 1913 to visit his ailing mother. However, he did not come to stay. He was too attached to Paris. While in Manila, he made several Philippine ladscapes. After six months, he started back for Paris, this time going to Japan and later crossing over to the continent via the Trans-Siberian railway.

While in Czarist Russia, he contracted a serious illness. He reached Paris a dying man. He journeyed to Barcelona where he died on March 13, 1913. The following year, a member of his family went to Spain to get the painter's remains, which now rest in the family mausoleum in the Manila North Cemetery.

Perhaps, the best acclamation of Hidalgo as a painter was made by Jose Rizal during a banquet at the Café Ingles in Madrid on June 25, 1884. Rizal said:

"….in the painting of Hidalgo throbs the purest of sentiment, an idealized expression of melancholy, of beauty and weakness victimized by brute force… Hidalgo is all light, color, harmony, feeling, limpidness like the Philippines in her calm moonlit nights, in her serene days with her horizons inviting contemplation."

Hildago and the Generation of 1972 by Alfredo Roces can be purchased from the Lopez Museum and Library Shop for PHP 2,600. To inquire about availability, please call 631-2417 or email This email address is being protected from spambots. You need JavaScript enabled to view it..